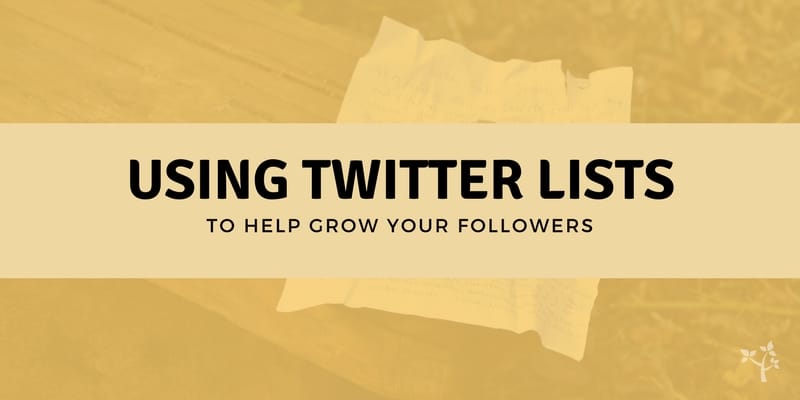 While Twitter lists can be handy for finding new people to follow, organizing the people you follow, and helping others to find you, they can also be helpful for building a community of followers. Lists are also a great way to see what people are posting without needing to directly follow them.

When you use Twitter lists effectively, you can find yourself in a position where you attract followers simply by virtue of the lists you share publicly and the lists you have been added to. But, you can also strategically use lists to find new followers.

Putting Together A Game Plan

To create Twitter lists that are meaningful, you need to start with a strategy. Who is your intended audience? Who do you want to appeal to with your tweets? Why are you tweeting?

Providing answers to these questions will help you to determine what lists to begin looking at. Write down topics you think you will want to create lists for. Use as many lists as are necessary and as few lists as possible. Adding people to lists also increases the likelihood that the added individuals will interact with you – either through thanking you or direct messaging you or through adding you to their own lists. It’s really simple to create a list.

To do so, head to “lists” in your drop-down Twitter menu and look on the right-hand side of your screen. Click on “Create a List.” Create a name for your list and fill in the description.

Filling in the description will help others find your list so that they can make use of it – if you choose to make a public list. You can also choose to make a private list, which will allow you to create target audiences, competitor lists, and other useful groupings of Twitter users. Once you’ve created a list, you may now add people to it. To add people to a list, you can either head to your followers or following lists or you can click on an individual Twitter profile. There are three dots to the right of the username, and you can click on that, select “add to list,” and then select which list(s) you wish to add the user to. Start by clicking on the first list. You’ll see a list of recent posts by those who are members of the list. Scan these posts! Make sure that the majority of them are on target with the sorts of followers you want to gain.

Start with the “subscribers.” People who subscribe to the list are going to be more likely to also subscribe to you should they be given the opportunity. Sometimes, there will be no subscribers. Move on to the members.

Follow each person there who has a recent relevant tweet. I say recent because sometimes people will add others to lists, but they will have no tweets. No tweets means that there’s no opportunity for interaction, and if it’s been a long enough time, it may be the case that the person either won’t follow you back or the person has abandoned his or her Twitter profile. To check this, click on the person’s name and take a look at the pop-up profile summary.

You probably will want to skip anyone who hasn’t posted in the last 1-3 months.  Make sure to check the individual’s follower to following ratio and decide whether it is worth your while to follow accordingly. If an individual has a lot of followers, but not many people that he or she is following, then unless that person is an influencer in your field, you’ll probably want to skip the follow.

Once you’ve followed anyone who qualifies, scroll back up to the top of the list. You’re not done here. Have you subscribed to the list? Is it a list that is relevant to your target audience? Do it. Check to see what other lists the person who has created. Are there other lists that are relevant to your target market or to your professional development? Good. Go through those as well. Add anyone you didn’t want to directly follow, but want updates from, to your own applicable lists.

Depending upon how many lists you’re a member of, it may take you a while to go through all of them in this manner, especially given Twitter’s follow limits. Don’t worry about it. Take it slow and steady, and know that over time you’ll get to everyone. So as to not spend hours upon hours on Twitter, you may want to cap your follows at a daily number. This can help make the task less daunting.

You may also find that it’s worth going through the users who are subscribing to a particular list. Be just as methodical going through these lists – qualify anyone you follow, add people to your own lists, and subscribe to any relevant lists you find this way.

Other Lists To Look Through

When Others Add You to Their Lists

When another adds you to their list, it’s important to both thank the individual for the inclusion and to investigate the list you’ve been added to. Check to see what the list’s theme is, who is on the list, and whether any of those members are individuals who you should also be following.

Sometimes you’ll be added to a random list that is only useful to the creator. Sometimes, you’ll find a goldmine of individuals to interact with. Follow others as appropriate, and be sure you go through any other relevant lists that the person who has added you has created.

Twitter lists are extremely useful for social media marketing, but they can take a lot of time to maintain if you are trying to do everything manually from the Twitter web interface.

On the positive side, however, there are a lot of great tools out there that make it much easier to create and organize these lists. Some of these applications help you strike up conversations with people while using your lists, while others help you put together your lists in the first place. Still, others make it easier to find relevant people to add to your lists. Here’s a roundup of applications you might want to take a look at. One of the first Twitter power tools I ever used was TweetDeck. This is still a decent, free, tool for Twitter. The list functions in it are simple, you can create a column to check up on various lists you follow, create new lists, and add and remove people from lists.

One of the benefits of using an app like TweetDeck is that it makes engaging with others a lot easier, you can see all your lists, notifications, and hashtag searches you’re following. I also like that it’s free, making it a great scheduling tool for startups. Hootsuite also allows you to look at your lists at a glance, but you can create multiple tabs. Hootsuite offers a free version, which is rather robust, and paid versions for multiple account management. You can also see a lot of analytics, view what you’ve scheduled, and enjoy the ease of use.

You can create or use existing lists in Hootsuite. Both TweetDeck and HootSuite have pretty straightforward list functions. HootSuite allows multiple users, so you can have your social media team manage your tweets and Twitter lists easily from its interface. You can also add other social media profiles to the app so that you can schedule all of your social media at once, in one convenient place. This saves a lot of time.

Audiense is a pretty robust Twitter analytics tool. You can view followers or those you are following by keyword, and you can easily create lists based upon that keyword in the tag cloud. Add or remove those you’re following to lists easily; make notes about individuals in your network, view whether someone you’re following is following you back, schedule Tweets and more. Subscription pricing begins at $31.15. Twitlistmanager is a very straightforward app. You can easily add and remove people from lists, create new lists, and delete old lists. This is the free app you want to use when you really need to clean up your Twitter lists, and you want to do so as quickly and easily as possible.

The best part of this app is that it’s very visual, and it allows you to skip a lot of steps when it comes to curating really great lists.

Tweepi allows you to manage and clean up your Twitter follows. You can also find new people to follow using the tool. It allows you to search users’ lists, create lists, view demographic information for an individual you are interested in following or unfollowing. You can also add people to lists through Tweepi.