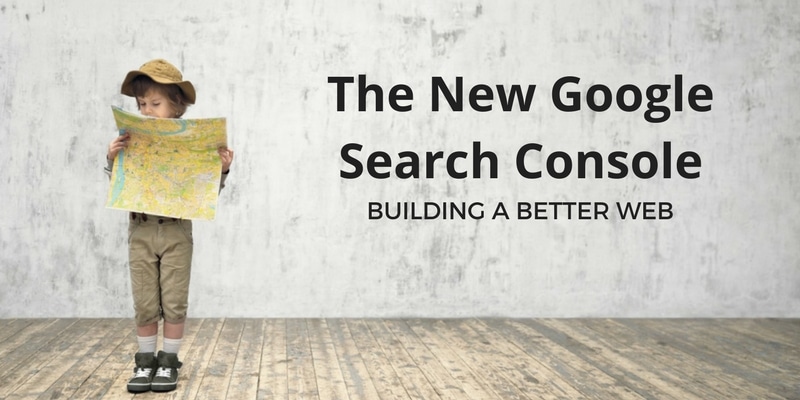 The bottom line is that Google is by far the most dominant player in the search engine market by a considerable distance. It enjoyed 63.4% of the market in the United States in April 2017, according to Statista, while its closest competitor, Microsoft, handled 22.8%.

That’s why when Google announces enhancements to its suite of webmaster software people take to sit up and listen. The redesigned Google Search Console is no exception.

What Is Google Search Console?

In a nutshell, Google Search Console is a free tool that allows you to keep track of how Google views your website. It provides information that can be used to tweak your website and optimize its performance in search results.

A common misconception is that you must have your website added to Google Search Console for it to appear in the Google search engine results pages (SERPs), but you don’t. In fact, Google says the majority of websites out there today have not been manually submitted for inclusion, but found and added by the search giant’s bots.

However, seeing as Search Console is free and provides you with an abundance of benefits, why wouldn’t you look to take advantage of it?!

Who Should Be Using It?

According to Google, “anyone with a website!” The great thing about Search Console is that you don’t need to be an Internet wiz to understand and use it.

Search Console is one of the most frequently used tools in the arsenal of SEO specialists and marketers worldwide, allowing them to monitor traffic, optimize their ranking, and enabling them to make informed decisions relating to the specific web asset.

When used in conjunction with other Google tools, such as AdWords, Analytics and, Google Trends, Search Console can afford even more powerful insights for businesses.

But you don’t have to be an SEO or marketing specialist to benefit. Site administrators, business owners, even individuals with personal blogs can utilize Search Console to ensure their website is operating as healthily as possible.

Why Is It Important?

As already mentioned, your website does not need to be manually added to Search Console for it to appear in Google’s search results. But adding it will benefit you in two important ways: by helping you monitor your site’s performance in Google Search results and discover how the world (and Google) sees your website.

Why A New Search Console?

The original Google Webmaster Tools was released more than a decade ago and included just four reports. Nevertheless, it was a hugely valuable resource for webmasters and site owners alike, and that’s the main reason why Google rebranded it to ‘Search Console’ in May 2015 – to be more inclusive of the diverse groups of people utilizing it.

Since then, Search Console has evolved enormously, now boasting more than two dozen reports and a host of other tools, including AMP, structured data, and live testing tools.

However, as we know, Google is always trying to improve the user experience and release new products to help its customers. That’s why it didn’t come as that much of a surprise when Google announced in August 2017 that it would be unveiling an extensively redesigned Search Console in the near future.

On January 8, 2018, Google officially announced that the new Search Console was ready to be released to all its users. Before we look at what’s new in the redesigned Search Console, it’s worth noting that the new product still doesn’t have all the same data as its predecessor (yet). That’s because Google is still in the process of migrating everything over and that’s why both versions will live side-by-side for at least the next year.

However, once all the data has been migrated, Search Console users will be able to take advantage of 16 months’ worth, instead of the usual three months they’ve been used to.

Other changes that made it into the new console were inspired by feedback received by Google through the search engine’s help forums and Search Console panel. We should expect the new Search Console to undergo further refinement in the coming months, as Google looks to implement more user requests. After all, it’s still only a beta release and doesn’t yet contain all the functionality of the old version.

Having said that, the new Search Console has three main new additions:

If you’re like me and have a penchant for analytics, you’ll love Search Performance Report. For a start, it’s got a full 16 months of data (as opposed to the three months we’ve been working with until now).

Not only does this make analyzing longer-term trends easier, it also enables you to report on year-over-year comparisons. Plus, there’s the ability to see a multitude of information on a single graph, such as total clicks, total impressions, average CTR and average position data (nothing new), AS WELL AS being able to filter by search type, query, page, country, and device (definitely new). Apparently, more data in Search Analytics has been something that Google customers have been craving for a long time.

Next up is the new Index Coverage Report. While Google Search Console has always provided some data on how sites are indexed, this improved report combines the old Index Status and Crawl Errors reports.

So as well as allowing you to see quickly and easily how your site is being indexed, you can also identify and fix any errors that may exist. Furthermore, the new console helps you trace the root of any potential issues, meaning you’ve got a better chance of fixing them quicker.

There’s even a “validate fix” button that allows you to check whether your corrective action has done the job, and which requests Google to re-crawl your site again, to save you from simply waiting for it to happen. Google loves mobile-friendly websites. It loves them so much, in fact, that it developed an entire solution to help businesses make their own websites load better on mobile devices: Accelerated Mobile Pages (AMP).

In the new Search Console, there’s a specific report that focuses on AMP and highlights any issues that may be present relating to this aspect of your website. Again, you can resolve any issues and use the “validate fix” button to have Google check that everything’s okay. You’ll also get a list of URLs that were identified as fixed.

It’s a similar setup for Job Postings. If you have Job Postings on your website, you can now see stats relating to them, pinpoint any issues, and fix/validate them.

The Implications For SEO

As we see it, the new Google Search Console has three main SE implications:

The new “validate fix” buttons are worth their weight in gold. Rather than fixing something and hoping it has worked, you can now advise Google instantly to check your work and provide you with a thumbs up or a thumbs down. These kinds of immediate notification mean you won’t be wasting time wondering of what you’ve done has worked or not.

With the introduction of AMP and Job Postings report, Google is encouraging webmasters (or anyone who uses the Search Console for that matter) to embrace these features.

Who knows, we may even see more reports like these rolled out in the future relating to other areas of the overall Google search offering.

The real jewel for data fans (like me) is the facet you can leverage 16 months’ worth of the stuff. This allows for more informed decision making and the ability to identify any possible trends. Plus, you can compare data from year-to-year. Just this functionality alone makes the new Search Console more powerful than its predecessor.

Have you already tried the new Google Search Console? If so, what are your first impressions? Don’t forget, more features will be added going forward, so expect to see some new stuff crop up.

I’m a full-time freelance writer and Managing Editor at Creative Mindscape who is lucky enough to call the tropical paradise that is the Philippines my adopted home. In my spare time, I love to dabble in cryptocurrencies and play with my three young children. One’s a stressful, non-stop rollercoaster ride; the other is cryptocurrencies.