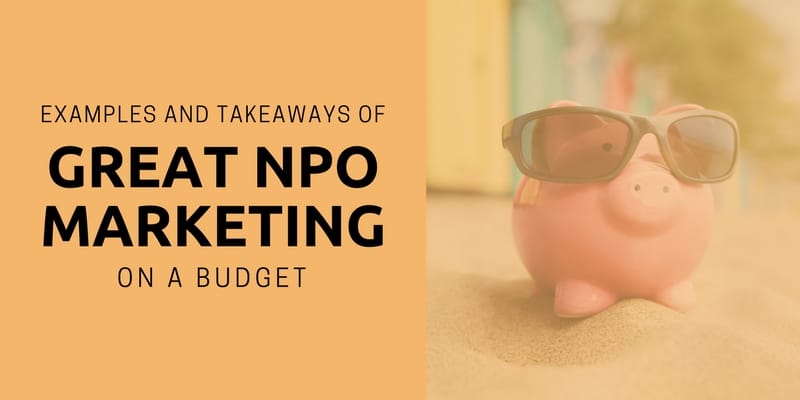 There are two things that every nonprofit organization needs to be successful: money and marketing. Smaller nonprofits often struggle with consistent marketing because the money is just not there to support wide-reaching campaigns.

However, when done right, there are lots of options for marketing campaigns that don’t have to cost a lot of money – just think of ALS’s ice bucket challenge that went on a few years ago. Here are some more examples of successful NPO campaigns that didn’t break the budget.

Last year, Parents Together launched a campaign using Facebook’s chatbot to get people to sign a petition to save PBS Kids and protect it from the possible privatization of public broadcasting.

The bot made it very easy for parents to share the campaign with other parents on their list and sign the petition by clicking on a button just a few times. They met their signature goals within a few days.

Takeaway: Strongly consider creating a chatbot that makes it simple for people to donate, sign a petition, volunteer, and share information about your organization.

Most people who are on Twitter are familiar with the First World Problems hashtag. For example, someone might tweet out, “When I leave my clothes in the washer so long they start to smell #FirstWorldProblems.”

The folks at the organization WATERisLIFE saw this trend, and they decided to make use of it to create the “First World Problems Anthem” video (below). The campaign has been very successful for them – and it drives a point home in a way that compels people to act.

Takeaway: What regular popular hashtags appear in your own Twitter or Instagram feed? Is there a way you can turn that hashtag into something relevant to your organization’s mission?

A few years ago, the Human Rights Organization and the Autism Speaks organization ran campaigns asking supporters to change their profile photos to an image that symbolized support for the group.

For the Human Rights Organization, that meant users changed their profile photos to an equal sign overlay covering the profile photo. Autism Speaks had a colorful puzzle piece overlay.

Since then, Facebook has developed the Frames tool that allows users to add a frame in support of their favorite causes, with new frames released in conjunction with holidays like Earth Day and monthly awareness themes like Domestic Violence Awareness Month in October.

Takeaway: Is your organization utilizing this feature? What “holidays” can you take advantage of? This is a great way to involve your supporters in getting the word out about your organization and its mission without also soliciting for donations. La Leche League is a champion of breastfeeding infants, and so it’s no surprise that one of their campaigns would focus on building moms’ confidence about breastfeeding their children.

One of their campaigns involves shareable badges. I’ve seen these crop up in my Facebook feed fairly often. A mom is proud to share her breastfeeding victory with her friends and followers, and she can do so by sharing the badge.

Not only does it help encourage moms who are doing something that is hard and to encourage other moms-to-be who are interested in breastfeeding their own infants, but it also allows people to easily click to get to La Leche League’s Facebook page as well as it gets the organization’s logo and web address in front of a vast audience.

Takeaway: Is there a way you can create a shareable image to celebrate a supporter’s victory? How can you use photographs and graphics to recognize the accomplishments of those who support your organization?

Preeclampsia Foundation helps women who have suffered from Preeclampsia or HELLP Syndrome during pregnancy or in the postpartum period. They have been turning the “storytelling” trend in marketing on its head by crowdsourcing content for their “Our Stories” blog.

This inclusive blog is a place where survivors or the families of those who lost their lives from Preeclampsia or HELLP Syndrome share their own stories. Individuals also share photos. This allows the foundation to share awareness in a much more touching way, and those who share their stories on the site also share links to their stories with their followers on social media to help raise awareness about this condition.

Takeaway: Consider appealing to those you are helping with your organization to tell their stories – either in blog post or video form – on your website. Those who are uncomfortable sharing their own stories on your website may also be moved to share socially with a link to one of the other stories on the website that resonated with them. Move to End Violence, an organization that wants to create social change toward a world that ends violence toward girls and women, created an email list-builder that keeps the name of the organization popping up in inboxes for at least 21 days.

The marketing tactic asks interested parties to join their mailing list in exchange for a tip a day on self-care. The campaign was so successful that they now offer it every month, starting on the first Tuesday. They ask that participants sign up, and tell others about their commitments.

Takeaway: What sort of daily challenge would your supporters benefit from? Can you take some aspect of your organization and turn it into a list-building opportunity, either through an e-book or a daily email? How can you make that list-builder something that is so useful that supporters will share a link to it so that their peers can also take advantage of it?

What are the campaigns that have stuck with you over the past year? What kinds of takeaways did you get from the campaign’s success?