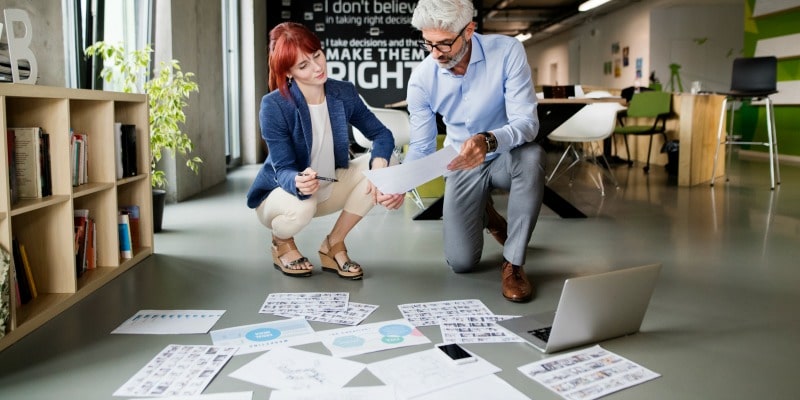 The financial services sector is one of the oldest, most traditional industries there is, encompassing banks, insurance companies, securities brokerages, financial advisory service companies, investment management firms and more.

Its traditional nature means that there has been an established way of doing things and a set of accepted protocols in place for a significant period of time. But times are changing and the financial services sector hasn’t been excluded from the digital disruption that’s been shaking up other industries in recent years.

With more and more FinTech start-ups entering the financial services space, the traditional institutions have been forced to take note of the changes that are occurring and revise their own approaches accordingly.

As a result, we’ve witnessed financial firms increasingly leveraging digital marketing mediums and techniques to expand their own reach, and connect with the customers of tomorrow who spend a large proportion of their time hanging out online.

Here are six excellent examples of how financial services companies have been driving real value through digital marketing and connecting with an increasingly diverse range of potential customers:

YouTube is one of the last places you’d expect to see a traditional bank – let alone one publishing satirical videos – but that’s exactly what Central National Bank in Waco did back in 2013.

Playing on the fact that Columbus Day was coming up on Monday 14 October (that year), the bank created a video that actually poked fun at the entire banking industry, highlighting that it was only people working in banks that would not be working that day.

To make the video even better, Central National Bank enlisted two of its own staff to star, rather than employ the services of professional actors/actresses. This adds a much more personal touch and serves to put a real face on the bank – something that many traditional financial institutions often struggle to do.

The video is actually pretty genius when you consider that the bank used what is effectively a run-of-the-mill public announcement informing people it will be closed, to actively connect and engage with its customers. Such a light-hearted and humorous approach is refreshing in an industry that’s known for its serious demeanor.

2. Citizens Bank of Edmond’s Use Of Instagram To Raise Awareness For Its ‘Heard on Hurd’ Street Festival

Social media is all about being social, which is why championing community spirit is an absolutely perfect fit – something Citizens Bank of Edmond knows only too well.

In 2014, the bank started a street festival called “Heard on Hurd,” which happens every third Sunday of each month from March through October. The bank says the street festival is kind of like an institution-customer appreciation day.

While the event itself is a great example of banks looking to build closer bonds with their local communities, the addition of social media has really boosted Citizens Bank of Edmond’s interaction.

Attendees can post pictures on their Instagram accounts using the hashtag #jointhehurd to get involved in the spirit of the event and amplify awareness.

Jill Castilla, president and CEO of Citizens Bank of Edmond, said: “People bank with community banks because they know you and, through social media, they feel like they have met us.

“We take no sponsorship for this event and do very little advertising, yet it has grown organically into an event we can hardly believe.”

Every week, First Bank Financial Centre holds a competition which sees a bobblehead figure of its CEO Mark Mohr placed in various locations. The bank’s Facebook followers then have to guess where in the world the figure is, with the first successful entrant receiving a $10 prepaid Visa card.

According to the bank’s vice president of marketing, Jeff McCarthy, the promotion has turned Mohr into somewhat of a celebrity:

“Mark gets recognized at conferences and professional association meetings,” he said.

However, while the competition can be seen as just a bit of fun and an opportunity for the bank’s followers to win some money, there is an extremely important benefit for First Bank Financial Centre and that’s the humanization of its brand.

The fact that the CEO has agreed to a bobblehead figure of him being used in this way for social media purposes suggests he is a pretty down to Earth guy with a good sense of humor. This personal level of interaction is priceless and as McCarthy puts it: “It has been a real win for us.”

Few financial institutions have turned to Pinterest to boost engagement, but Bank of America has a lot of success on the image-centric social platform.

Bank of America started using Pinterest back in October 2014 and within a year, the image-sharing platform was already driving 30% of the bank’s social media traffic to its money management website targeted at millennials – Better Money Habits.

The reason Bank of America has experienced success is that it has managed to repackage its personal finance content for Pinterest, creating boards related to “buying a home” and “travel plans” and then filling them with images that link back to its Better Money Habits website.

Furthermore, Bank of America’s Pinterest efforts have focused on Millenials, a group that’s been through many financial firsts, like buying a home, getting married and even saving for retirement.

Talking about the bank’s Pinterest success, Christopher Smith, enterprise social media executive at Bank of America, said: “We’ve been successful because we’ve listened to what the community wants to know more about based on what people are searching for and customized our content to meet those needs.”

The real beauty of what Bank of America has been doing on Pinterest lies in the way it has created visually stunning pins that then link to much deeper, more in-depth content on its educational Better Money Habits website. By adding all this value, the bank has created trust and forged meaningful relationships with its followers – followers who may just come to Bank of America when they need financial services.

When you’re a brand like Western Union, your digital marketing initiatives do not necessarily need to focus on making people more aware of your business. After all, Western Union is already known across the globe, which is why its American Dream Sweepstakes campaign focused instead on below-the-line engagement.

For the campaign, Western Union spent seven days speaking with people in San Francisco to find out if they genuinely believe in the “American Dream”. What they found was that many people did indeed believe in the concept, but that many just wanted things like freedom from debt, down payments on a home, and college tuition.

Throughout 2015, Western Union customers had the chance to win over $180,000 in cash prizes. The cash prizes could be used towards buying a car, paying college tuition, or even as a down payment for a new home.

The American Dream Sweepstakes campaign was predominantly pushed via social media and as a result, over 13,000,000 eligible entries were received during the promotion period. Moreover, Western Union won several awards for the campaign, including an IAC (Internet Advertising Competition) award and an AAF (American Advertising Federation) Mosaic Award.

This YouTube video formed part of the overall campaign:


This entire campaign is a fantastic example of how social media can be leveraged over a longer term (one year) to drive amazing results and boost engagement.

Kansas-based H&R Block has taken an extremely novel approach to securing more adult clients and that’s by marketing to them and engaging them while they are still children.

The H&R Block Budget Challenge is a free teaching resource for schools that want to promote good financial practices to their students. The online simulation enables teenagers to make real-world financial decisions without the associated consequences if they turn out to be wrong.

By equipping teens with the skills, habits, and confidence they need to thrive in real-life financial situations, H&R Block is strengthening its relationships and trust with its customers of tomorrow.

It’s another example of how a long-term strategy can actively provide value in people’s lives and help promote good financial literacy among the individuals who probably need it the most.

As you can see from the examples outlined above, financial services companies are actively embracing digital marketing and achieving awesome results. It highlights how even the most established, traditional sectors have succumbed to the digital disruption occurring in their spaces and are looking to embrace it, rather than fight it.

I’m a full-time freelance writer and Managing Editor at Creative Mindscape who is lucky enough to call the tropical paradise that is the Philippines my adopted home. In my spare time, I love to dabble in cryptocurrencies and play with my three young children. One’s a stressful, non-stop rollercoaster ride; the other is cryptocurrencies.