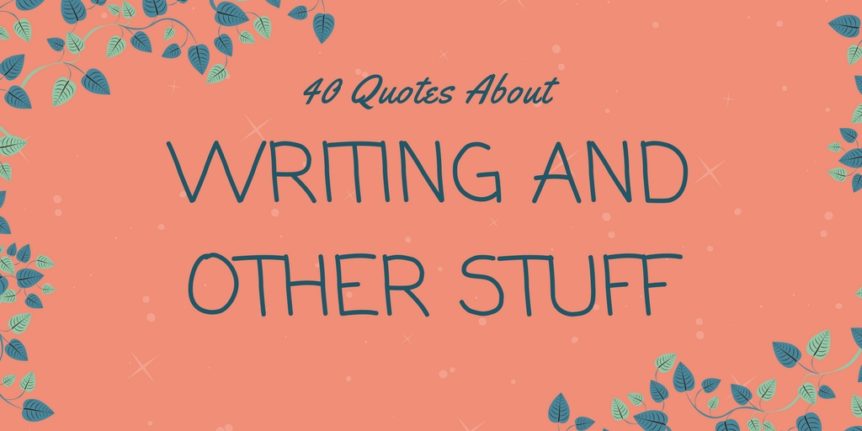 We stare at the blank piece of paper in front of us or that glaring white space that Microsoft Word is using to taunt us. Warning: Procrastination alert! Suddenly, checking Twitter feeds and answering email – or anything else that makes us feel productive – become MUST-DO-NOW tasks.

I’ll admit it. I’ve lived in that frustrating world of blankness way too much for my liking. When I’m there, I often end up searching the web for things like “inspiration to write” or “motivational quotes for writers.” But this is the first time I’ve decided to take those searches and write about them. 🙂

So, if you need a little inspiration or just want an excuse to keep procrastinating, read through these.

Getting Started And Procrastination

1. “Procrastination is like a credit card: it’s a lot of fun until you get the bill.” -Christopher Walker.

I really hate those all-nighters when you’re trying to cram a week’s worth of writing into 8 hours. Or 4. Or 2.

Okay, so the main reason I like this quote is that I like to say “assassin.” Assassin. Uh-sass-in. Uh-sassssss-in. 4. “I have an advanced degree in procrastination and another one in paranoia.” -Joanne Harris

Mama always said procrastination and paranoia go together like peas and carrots.

5. “The secret of getting ahead is getting started.” -Mark Twain

When in doubt about the origination of a quote, Mark Twain is a safe bet. Even if he didn’t say it, people will believe you if you say he did.

6. “Organizing is what you do before you do something, so that when you do it, it is not all mixed up.” -A.A. Milne

Pooh may be the main character in Milne’s books, but Eeyore is and always will be my friend.

7. “Procrastination is the art of keeping up with yesterday.” -Don Marquis

8. “I love deadlines. I like the whooshing sound they make as they fly by.” -Douglas Adams

Douglas Adams is my hero. Well, he is during those times when I need to take a break from Neil Gaiman being my hero. 9. “I lost some time once. It’s always in the last place you look for it.” -Neil Gaiman

Neil Gaiman is my hero. Well, he is during those times when I need to take a break from Douglas Adams being my hero.

10. “The thing that would most improve my life is 27 hours in a day. I could meet all my deadlines.” -Yoko Ono

That only works if you have 27 and everybody else still has just 24.

11. “One, I push my deadlines closer than anybody else, or let’s say it this way: I’m really late.” -Aaron McGruder

13. “One thing that helps is to give myself permission to write badly.” -Lawrence Block

Hmm. Or maybe I should pretend like bad writing is the goal. It’s a win-win situation. If I fail, I’ve written something good, and that will make me happy. If I succeed, I’ll have met a goal and…. NO, STOP! This is how I ended up with all those sales-are-final clothes in my closet that are too big for me.

14. “Sometimes the best way to learn something is by doing it wrong and looking at what you did.” -Neil Gaiman

Don’t think about failure as something bad. Just look at it as eliminating one of your choices of what to do. Because it failed. But we writers of steel EAT FAILURE FOR BREAKFAST!

15. “And now that you don’t have to be perfect, you can be good.” -John Steinbeck

This is, perhaps, the best thing Steinbeck ever wrote. Except for Of Mice and Men, of course. “Maybe ever’body in the whole damn world is scared of each other.”

16. “I discovered that rejections are not altogether a bad thing. They teach a writer to rely on his own judgment and to say in his heart of hearts, ‘To hell with you.’” -Saul Bellow

17. “Creativity is allowing yourself to make mistakes. Art is knowing which ones to keep.” -Scott Adams

18. “Mistakes are the portals of discovery.” -James Joyce

What a beautiful sentiment! That Joyce guy should write or something.

The Life Of A Writer

19. “I may not have gone where I intended to go, but I think I have ended up where I needed to be.” -Douglas Adams

Yes, I know that I already have one quote from Adams on this list, but that’s okay when you’re working with a hero.

Oh, if you’ve never read anything by Singer, I highly recommend Gimpel the Fool.

21. “The greatest part of a writer’s time is spent in reading in order to write. A man will turn over half a library to make a book.” -Samuel Johnson

23. “The writer is a mysterious figure, wandering lonely as a cloud, fired by inspiration, or perhaps a cocktail or two.” -Sara Sheridan

Or three. Or four.

24. “One of the great rewards of a writer’s life is that it lets you read all the books you want to without feeling guilty.” -Damon Knight 25. “The best way to become a successful writer is to read good writing, remember it, and then forget where you remember it from.” -Gene Fowler

And what do you do after that, Gene? Plagiarize?

26. “All you have to do is write one true sentence. Write the truest sentence that you know.” -Ernest Hemingway

Yeah, Ernie, that’s easy for YOU to say. It’s a little bit harder than that for those of us who don’t have a Nobel Prize in Literature.

28. “The writer is the engineer of the human soul.” -Joseph Stalin

Hey, every list of quotes needs at least one that was uttered by a super-villain.

29. “The road to hell is paved with adverbs.” -Stephen King

30. “I was saving the name of ‘Geisel’ for the Great American Novel.” -Dr. Seuss

I physically cringe every time I see people misspell the doc’s name as “Suess.” Yes, I used an adverb in that last sentence. In your face, Stephen King.

31. “This writing business. Pencils and what-not. Overrated if you ask me.” -Eeyore (A.A. Milne)

32. “Writing, to me, is simply thinking through my fingers.” -Isaac Asimov

33. “Maybe stories are just data with a soul.” -Brene Brown

I’m not sure what this means, but it sounds deep and profound.

34. “I watched Titanic when I got back home from the hospital, and cried. I knew that my IQ had been damaged.” -Stephen King.

37. “A day without sunshine is like, you know, night.” -Steve Martin

38. “Common sense is the collection of prejudices acquired by age eighteen.” -Albert Einstein

So, the next time someone says, “You don’t have any common sense,” take it as a compliment.

This one is a close second to my favorite quote ever.

And now, I’ll end this list with my all-time favorite quote:

40. “If you wish to make an apple pie from scratch, you must first invent the universe.” -Carl Sagan

And a bonus quote: